Wireless technologies have been developing rapidly since the beginning of the century. Today’s wireless ecosystem is based on reliable 4G connectivity, ranging from 2G to 3G with an Internet connection.

The leap from 3G to 4G has become one of the most significant technological innovations in the mobile communication market. This has made mobile data roaming a more acceptable option for customers (no longer having to wait for the web page to load!). It opened the door for fast downloads, which resulted in excellent connectivity and convenience of our smartphones.

Almost all the features of today’s smartphones, from instant messaging services to mass multi-player games, result from the 4G network.

The fifth-generation wireless network technology, better known as 5G, is being implemented in major cities around the world. By 2024, about 1.5 billion mobile users, accounting for 40% of current global activity, will use 5G wireless networks.

With 5G on the horizon, there will be another significant leap forward in mobile data – many customers and companies are looking forward to its benefits. With over 5 billion mobile users worldwide, our world is growing faster than ever.

The data from GSMA Intelligence shows how fast global traffic can grow in different networks:

But what is the difference between 3G, 4G, or 5G? In this article, we will analyze each of them, look at relative speeds, and determine how smartphone usage has improved over the past 20 years. 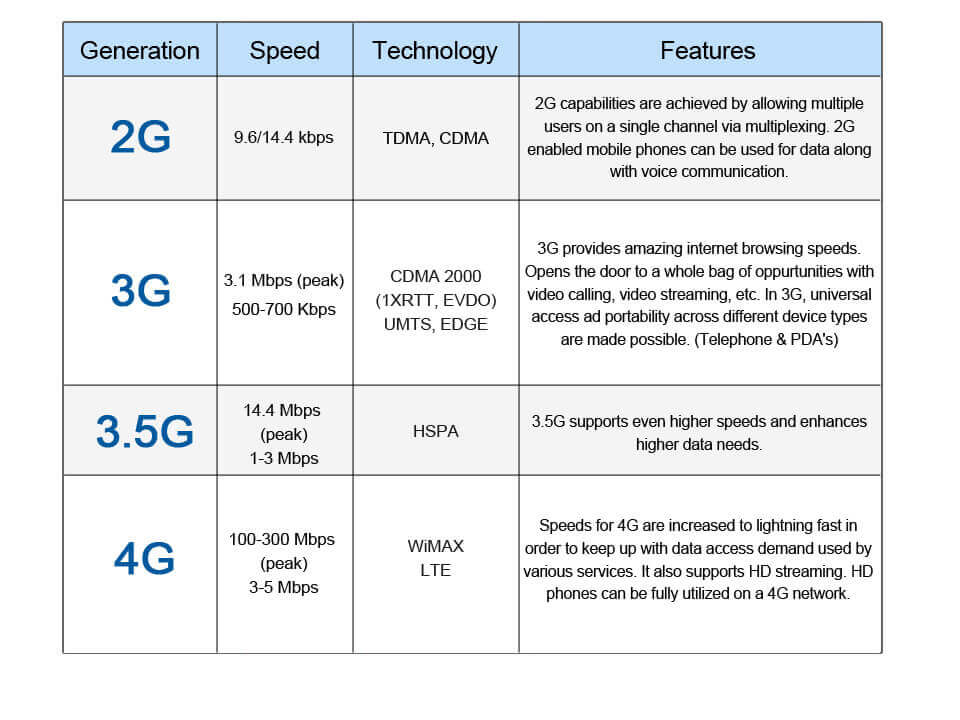 “G” stands for “GENERATION”. When connecting to the Web, the speed of the connection depends on the signal strength, displayed in such abbreviations as 2G, 3G, 4G, 5G, etc. on any mobile device. We define each generation of wireless broadband as a set of telephone network standards describing the system’s technical implementation.

Wireless communication aims to provide high-quality, reliable connections and wired, and each new generation represents a massive leap in this direction. Mobile communication has become more popular in the last few years because of the rapid reform of mobile technologies.

To compare 2G, 3G, 4G, and 5G, it is necessary to understand the critical features of all these technologies.

In the 1980s, the first generation of 1G networks appeared with only voice analog services. The maximum data transfer speed in 1G networks was about 2.4 KBPS.

The 2G network was launched in Finland in 1991, enabling mobile phones to move into the digital world. 2G includes encryption of calls and text messages and SMS, picture messages, and MMS.

2G belongs to the second generation of mobile networks based on GSM. Radio signals used in 1G networks were analog and 2G networks digital. The 2G capabilities were achieved by allowing multiple users to work on the same channel through multiplexing.

When using 2G for data transmission, we used cell phones along with the voice. Some key features of 2G were:

The 3G network with a lot of data, video calls, and mobile Internet was established in 1998. We can now consider a “slow” network in many significant cities as the pinnacle of technology until 4G appeared. 3G networks reach speeds of 2 Mbps on fixed or fixed devices and 384 Kbps on devices for moving vehicles.

By using packet switching, the original technology has been improved to provide speeds of up to 14 Mbps. A broadband wireless network has been used, which has improved the accuracy of data transmission. It operates in a 2100 MHz band and has a bandwidth of 15-20 MHz. Some key features of 3G:

4G, or the modern cellular network standard, was released in the late 2000s, and it’s 500 times faster than 3G. It supports high definition mobile television, video conferencing, and more.

However, since users have a total capacity of a sector, the observed acceleration is usually 10-100 Mbit/s.

Some features of 4G LTE:

As more and more people gain access to mobile devices and the Internet of Things expands, we expect that by 2024, 24 billion devices will be needed to support cellular networks. This is where 5G comes into play.

With 3G Tower, about 60-100 people can split the signal and get fast and reliable service. However, 4G Tower can serve about 300 or 400 people. As network generations develop, engineers and programmers pack as much digital data as possible into each radio signal to maximize network speed and efficiency.

The difference between these generations is that the network is improving compared to the previous Internet, not that 4G is twice as good as 3G. 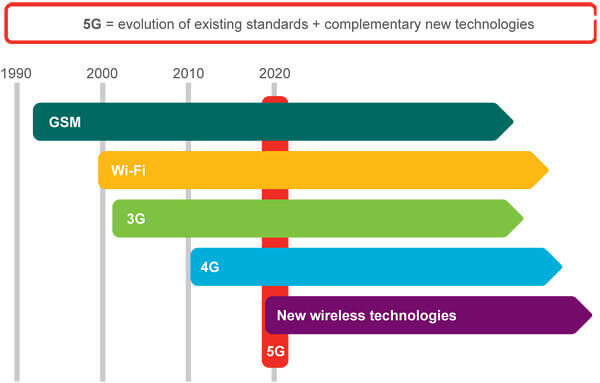 The simple interpretation of 5G is that it will be faster than 4G. 5G will be more rapid than 4G, with most estimates assuming it will be in the 1-10 GB/s range. This significant increase in speed will allow customers to interact with the technology completely differently, connecting people to the Internet of Things (IoT), ensuring seamless integration of devices across all layers of society.

This is one of the most significant 5G anchor points.

5G can lead to the development of other technological innovations, such as introducing block circuits into the mainstream and expanding our current capabilities in AI.

Low latency is one of the essential characteristics of 5G. 5G uses a scalable orthogonal frequency division multiplexing structure (OFDM). 5G benefits significantly from this and can have a delay of up to one millisecond with realistic estimates of about 1-10 seconds.

As the number of mobile phones grows globally, cellular networks must adapt to handle many users and the massive demand for data, so it satisfies customers with how quickly they can access Internet services.

Every leap in network performance or capabilities is called the next generation. For example, 3G is the third generation after 1G and 2G.

Smartphones with 3G show download speeds of up to 2 Mbps (megabits per second). For comparison, 4G is about 3 to 5 Mbps, which corresponds to the speed that many home computers receive via cable modem or DSL.

The peak download speed of 5G is up to 20.480 Mbps, a tremendous leap compared to any previous generation.

With higher generation networks, higher bandwidth comes in, which means it can support a more significant number of users. It will also increase the data transfer rate so that multimedia applications such as video calls or YouTube clips will run smoother.

Therefore, there is a lot of noise around 5G. The 5th generation wireless network addresses the evolution from the mobile Internet to massive IoT (Internet of Things). 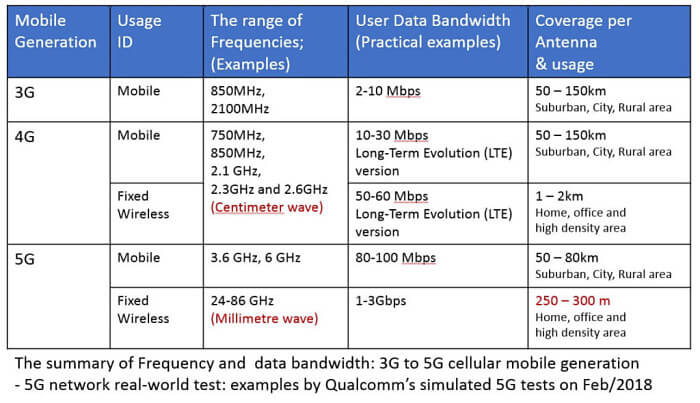 The capabilities of the network are much faster than in previous generations. So they can connect more objects than ever before, including connected vehicles, attached homes, and smart cities. Simultaneously, the speed and reliability of 5G will make a new era of healthcare possible.

5G networks will also use “small cells” compared to the “macrocells” used in 4G networks. This means they are smaller, require less power, and can be installed much faster.

In any mobile phone network, the signal is received from the frequency used. Low rates are the most reliable and can penetrate obstacles such as buildings, so 3G will often work in more places than 4G. Higher frequencies are more direct, but also quickly disperse into objects.

Mobile operators who want to provide more reliable services will seek to use lower frequencies. However, those who want their customers to have higher download speeds will also try to offer higher rates.

Since 5G will use higher frequencies, which have a more limited range, it will be necessary to install more 5G towers to support network reliability. However, since they are smaller and do not require a tower to be installed, they will be placed on buildings and lampposts.

Are there any internet providers using 5G?